The new multimedia opera Four Electric Ghosts by Mendi + Keith Obadike recently premiered at The Kitchen in New York, May 14-16, 2009. This breathtaking performance combines dance, theater, folklore, digital media, pop culture, and live music to create a dynamic narrative journey. The journey is told through stories and songs that weave a magical world. Influenced by the landscape of Amos Tutuola’s novel My Life in the Bush of Ghosts and the arcade game Pac-Man®, Mendi + Keith Obadike were intrigued by the world of ghosts portrayed in both the novel and game. They wanted to imagine this world from a new perspective using both Igbo and American folklore; rather than tell the story of mortals caught in such a world, Four Electric Ghosts shares unique stories of four sisters and their travels in the afterlife. This journey and world is hauntingly beautiful and progressive, reflecting African Diasporic cultures and possibilities for a transgressive future. A world and future where Black peoples stories and cultures are not tokens or last minute additions, but rather, they are necessarily present in complicated ways that explode rigid notions of Blackness and Black identity. 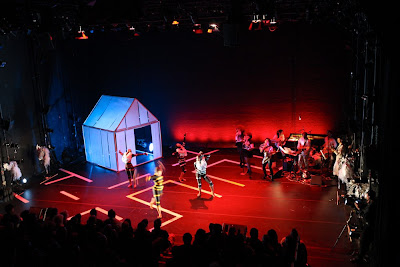 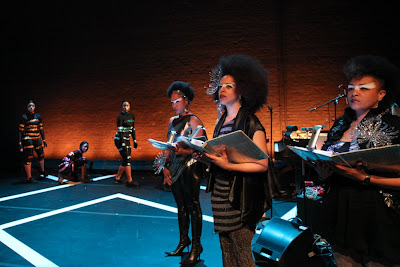 To develop this world, Mendi + Keith Obadike joined forces with Angela’s Pulse Performance Projects: choreographer Paloma McGregor, stage director Patricia McGregor, and dancers Maria Bauman, Catherine Denecy, Marjani Forte and Keisha Turner; with design by Kate Cusack (costume), Yuki Nakajima (animation / projection), Alexandre Delaunay (scenic), and S. Ryan Schmidt (lighting). The music was created by Mendi + Keith Obadike in collaboration with bassist/producer Melvin Gibbs and musician Guillermo E. Brown—performed live by Brown, pianist Shoko Naga, and bassist Keith Witty. The characters include four female dancers as the sisters (the four electric ghosts), and three female singer-sayers who narrated and sang the stories, Latasha Nevada Diggs, Karma Johnson, and Mendi Obadike. The multi-layered world of Four Electric Ghosts was led not only by music, dance, and songs, but also live animation and projection by Yuki Nakajima. The world created was visually stunning from start to finish—-the digital effects added futuristic elements, the live music, and the characters’ vibrant costumes added to the narrative dimension of the stage and performance. The four dancers in black body suits distinguished with strips of bright color (red, pink, cyan, and orange), captured the audience immediately as they portray the electric ghosts. The singer-sayers can be thought of as a remix of the Griot (traditional African storyteller); with an Afro-futurism vibe, their costumes and makeup evoked a mix of silver and metallic and a 1960’s soul flare with an edge of punk. 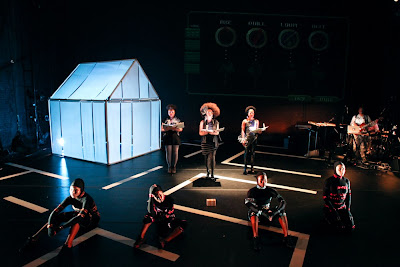 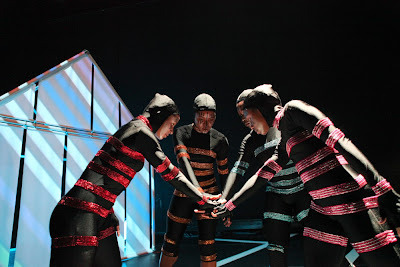 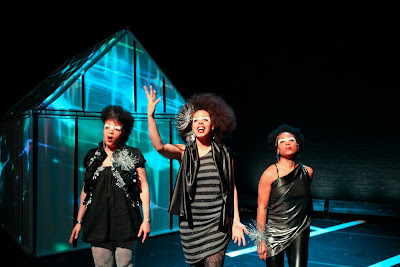 The result of this seemingly odd mixture of game culture, literature, digital technology, live music, and storytelling is in fact pure genius. It is one of the most innovative and refreshing productions I have ever seen. Four Electric Ghosts most certainly challenges contemporary Black cultural production by centering the voices of Black women through stories that cross cultures and time in a diverse multimedia opera. Yet it defies what some like to call a “post-Black” moment (the notion that we have moved beyond race) because frankly Four Electric Ghosts is so very Black. I say this not only because its characters are Black and female, but also because of its music and dance and use of folklore. While some may categorize this multimedia opera as “post-Black” because of its use of multiple art forms and digital technology, this engagement is rooted in and in dialogue with the complexities of Black culture(s). From the eclectic mix of different musical forms (funk, jazz, soul, rock, electronic, and gospel) to dance performance that drive the stories, Four Electric Ghosts successfully weaves together and remixes elements of contemporary dance and music with African-centered art forms.

The stories in Four Electric Ghosts are grounded in the West African (Igbo) tradition of storytelling and basic truths passed along though song, dance, and proverb. The narrative layers include storytelling narration, songs, digital story boards, and dance to tell each sister’s journey. The four sisters receive gifts and protective chalk from their mother, a wise farmer woman, who splits a kola nut among her daughters, and they each reap a special item from their part of the kola nut. But the sisters die in an electric storm and end up in “The Land of the Dead,” where each sister embarks on a journey from their Electric Town to different towns within the land—first sister in Floating Feather Town, second sister in Flavorville, third sister in Weather Town, and fourth sister in the town of Fish-Headed Junk Ghosts. Their stories are textured with mythic adventures: first sister angers a wizard by cutting down a special tree; second sister learns the sacred secrets of flavor; third sister falls in love with a mortal woman; and fourth sister becomes a gospel star and breaks a sacred rule. Luckily, they still have their protective chalk and special gifts from their mother, which help them during encounters with different ghosts and trouble with mortals. The sisters each learn and grow during their travels, and in the end, they return just in time to save Electric Town from an evil mortal. The stories are seamlessly woven together through the singer-sayers and songs with clever and proverbial titles, like “Dark needs Sunlight,” Death Begins with An Appetite,” “No Hands Can Hide the Moon,” and “Everyday Medicine.” Meanwhile, the music and striking digital media enhance the stories and give depth to the world of Four Electric Ghosts. 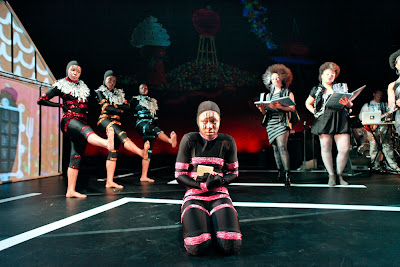 The multi-layered narrative makes the performance energetic, soulful, and interactive. As the story ends, the sisters and the singer-sayers glide through the audience and bring people to the stage for the last dance and song. At this moment, we the audience became part of the story and part of the future—an imagined (possible) future that values African Diasporic cultures and Black women’s stories and celebrates the diversity of Blackness. This is just a taste of what is a remarkable and beautiful journey in Four Electric Ghosts. I can hardly do it justice here, but what I hope to do is spark conversation among those who experienced it and incite more buzz for another run of this magically executed work of art. 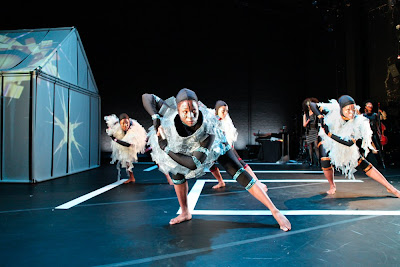 Your modesty here is endearing. With this review, you have accomplished more than just "doing Four Electric Ghosts justice." Had I not been sitting right next to you during the show and experienced all of the wonders of it my self, this review would have me searching high and low for my own way in to the world of the sister ghosts.

I say again: this is excellent, Angelique. Many prayers of light and success in getting this published ma. . . .You never cease to amaze me ;o)