The theme of this year's International Women's Day (March 8th) was focused on domestic violence and sexual abuse against women and children. So I wanted to take some time to reflect on how different forms of violence are connected - domestic violence, hate crimes, sexual abuse, and homophobic violence. It is disturbing to think about how much violence is enacted by men because of what they perceive as a threat to their masculinity, sexuality, or authority. I remember growing up and seeing MOST of the men in my family hit their wives and girlfriends. I remember watching my mother deal with abusive men till she passed. I remember how much we accept violence as normal, and how some can sit with a straight face and ask "what did she do" in cases of domestic violence.

These thoughts ran through my head as I read about Chris Brown and Rihanna, and when I heard about young teen girls creating a website and saying in online forums that they support Chris Brown no matter what. On Bossip, the writers painted Rihanna as "the problem" - she gave him something, she was too needy, and other such nonsense. What was striking to me in all the news reports and the gossip sites is that people were looking for "the reason" why this particular event happened, as opposed to any real discussion of domestic violence (and for instance how it crosses class lines). People seemed to sympathize more with Chris Brown and his loss of endorsements, while obsessing over the pictures of Rihanna and whether or not she would take him back (invasion of privacy). Granted they are both public figures and celebrities, so one could argue that they have no privacy. But I have to wonder how much of this invasion has to do with her being a Black female. Certainly, she has much more protection than others because of her celebrity status and her money. Still I have to wonder how the reporting would have gone down if she was white or if she were not extremely popular. If she had no status or money, it would not have received the same kind of media attention, of course, or it may have been painted differently.

Let's think about other public cases of Black women experiencing violence at the hands of Black and non-Black men. R. Kelly's acquittal and how the young Black female (on "the tape") was discussed in the media. Her body was so easily dismissed and rendered "whore," beyond rescue, a non-victim of sexual violence. The Duke Lacrosse case - while the "actual" events remain unclear and contaminated within an inept legal system, what is clear is that the accuser was demonized from the beginning as "stripper" and "whore" - Black woman's word against a bunch of white men - who then became the victims while she got death threats. Obviously these cases are very different, but they are all rooted in sexism, racism, and violence.

Audre Lorde argues this very point in her essay "Sexism: An American Disease in Blackface," and she supports an open dialogue between Black men and Black women about sexism, one that confronts sexism and racism in order to abolish violence in our communities. Published in 1979, this essay by Lorde is still very relevant, particularly in her analysis of the connections between different forms of violence:


"But the Black male consciousness must be raised to the realization that sexism and woman-hating are critically dysfunctional to his liberation as a Black man because they arise out of the same constellation that engenders racism and homophobia. Until that consciousness is developed, Black men will view sexism and the destruction of Black women as tangential to Black liberation rather than as central to that struggle. So long as this occurs, we will never be able to embark upon that dialogue between Black women and Black men that is so essential to our survival as a people. The continued blindness between us can only serve the oppressive system within which we live." (64)

While her context for the essay is the United States, her analysis is useful for other communities of color and post-colonial societies. In other words, her words ring true for me as I think of the Caribbean context and the Bahamas in particular. While things have changed since I was growing up, we still have a huge problem with domestic violence and sexual abuse in our communities. Certainly, this is not only a problem in communities of color; in fact, we know that domestic violence crosses racial and class lines. But what I am pointing out here is exactly what Lorde argued almost 30 years ago – to discuss violence and the abuses that Black women experience must include a dialogue about racism, sexism, and homophobia within the larger context of white capitalist patriarchy. We still experience what Lorde describes as “the systematic devaluation of Black women within this society” (65); and I would include other societies and communities as well, in which Black women and other women of color remain marginalized (economically, politically, and socially).

Lorde suggest that in order to stop the abuse, we must begin the dialogue. And we cannot accept some forms of violence and condemn others. In other words, we can’t fight against domestic violence and sexual abuse and do nothing about homophobia. So now that the media attention on Chris Brown and Rihanna has “renewed” the issue and perhaps reminded the public that domestic violence crosses class lines, let’s use this moment as another spark. Let us push the dialogue forward, change the conversation, break the silence, and hold the media accountable for what it chooses to focus on. Let us search for and promote organizations that hold men accountable for violence (Kevin Powell was recently on Oprah talking about his work on this very issue and his new organization for men). Let us spread the word about the important documentary NO! by Aishah Shahidah Simmons. Let us talk in our own families and communities about violence. Let's make everyday International Women's Day. 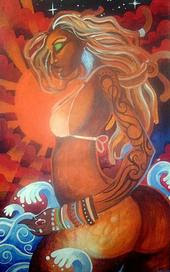 Posted by Angelique at 3:54 PM

I will never cease to be surprised how far violence stretches. One
thing humans have always and will probably always be good at is violence and murder, especially of other human beings. I mean, think about it...we've been doing it so damn well for, at this point, what is now probably more than 3,000 years. We, as the human race, in general, should be ashamed.

What your post has reminded me of is how violence, especially domestic, is publicized for some while hundreds and thousands of others go unseen and unheard, and lie bleeding and dying somewhere just about every few minutes of every hour....of every day.
In regards to this violence within lgbtq communities, well, we can see (or, not see, as it were) how domestic violence is left highly
unreported and undocumented.
To hear a 21-yr-old young woman laugh and joke about slapping her
girlfriend or a friends girlfriend needing to be knocked out, I must
say, is very disturbing.

You're post further highlights how much needs to be said, shouted,
screamed for people to become aware. Awareness is always the key, for only with knowledge can come change.

Thank you for sharing this. Keep the wisdom coming.