Yesterday (October 17th) was the 'International Day for the Eradication of Poverty'. Democracy Now covered this on Friday - and their guest was Amnesty International's Irene Khan, who talked about her book on poverty and human rights. As I watched this segment and reflected on some of the startling numbers - like 1/3 of the world's population are living in poverty and that 1 billion people go hungry everyday - it made me think about the violence of poverty and how it breeds hopelessness. I also think about studies that say 70% of people living in poverty are women. And how women around the world are fighting and organizing and articulating economic and social rights as human rights [check out these sites: IPS News Reports on Gender Equality & Economica: Women and the Global Economy.]

I am talking about these issues in all of my classes, and so they are on my mind constantly. And I grew up in poor working-class communities in the Bahamas, and so I know intimately what we can call the violence of poverty. But I climbed the socio-economic ladder and "made it out" - in spite of great odds and because of hard work. Yet I must acknowledge the opportunities afforded me because of my light skin, scholarships I received, and hence access to higher education. I often feel guilty for making it out and an overwhelming responsibility to live up to something I can't even name. I know my story is not so unusual, yet at the same time, I know that I am an exception to the rule rather than an example of the meritocracy myth - "if you just work hard and believe, you will make it" - cause we all know it ain't that simple. I could easily have ended up on a very different path.

Khan discusses the challenges people face around the world because of unequal access to resources, especially education - which then makes it almost impossible to get out of poverty. She draws a comparison between herself and her family's housekeeper's son - they grew up together but because of class differences and social status, they have ended up in very different places - she had the opportunity to get an education and leave Bangladesh and he didn't. Her story illustrates the clear connection between poverty and class. And yet there are so many stories - complicated by race, colonialism, gender, sexuality, and location - the experiences of many people around the world. Khan highlights some of the struggles and movements in different places, and she insists (similar to Paulo Freire in Pedagogy of the Oppressed) that people who are poor must be empowered to create change -- in other words, they must be the center of their own movements and decision making or what Freire explains as coming to consciousness. This is one of the reasons I wanted to be an educator and teacher- because I experienced empowerment through education - both formal and community.

So today - reflecting on these days set aside to "Stand Against Poverty" Oct 16-18- I wanted to share these sites and sources. And think about how we can make EVERY DAY a stand against poverty. This is too much to talk about here, but we've gotta start somewhere. And the work has begun. So we can support the movements that are in progress. We can make sure that debates/struggles over human rights include eradicating poverty and fighting for social and economic justice. We can spread awareness about the movement to eradicate the IMF/WorldBank/foreign debt of the "Third World/Global South" - the countries who make "First World/Global North" wealth possible. We can develop more strategies to support organizations/groups who focus on empowerment at the local level. We should continue the work of challenging how we define human rights. We must talk about class issues in the places in which we live - and how these are complicated by race, gender, and sexuality. And we must change the way we talk about poverty - as if it is only the problem of those who endure it - because it should matter to everyone. 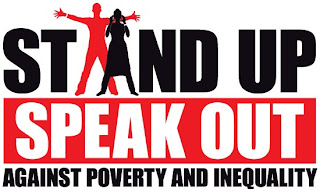 Posted by Angelique at 6:36 PM

thanks for this, I missed this date