After a long hiatus, I'm finally getting a chance to share on my blog space. It's been way too long... but here I am after some months and reflection on how/if I want to keep up this space of conscious vibration. So I decided for now that I will continue using it as a "here is what I've been up to" and archive of my work... till I figure out what I want to do with this space.

So here goes it -- the last few months in highlights -- my TOP FIVE:

1) I'm moving to Trinidad in August! I'm going to be a Fulbright Scholar at the Institute for Gender and Development Studies at University of the West Indies, St. Augustine, Trinidad and Tobago! I am beyond thrilled and feeling incredibly blessed and so grateful! Found out in late March and its been a whirlwind of making plans and getting ready for my big move!!! I'm still giddy with joy and excitement! I feel like this has been a long time coming -- I am ready to be back in warmth and homespaces of the Caribbean. *~*~* I will miss being in the NYC area... and all my NYC peeps and community... but sooooooooo happy to be going on this new journey! I plan to write lots and post regularly about my work in Trinidad and hope to be more on the social media... I will be joining twitter (finally... I know... way late...) more on that soon.


2) Spring in New York -- Being photographed for a beautiful exhibit by Laylah Amatullah Barrayn called "You May Sit Beside Me: Visual Narratives of Black Women and Queer Identities"; Spending time with Angela Davis during her scholar in residence week at NYU's Institute of African American Affairs; Attending the Beyond the Bars conference at Columbia; and Moderating a really powerful series "Brother to Brother, Sister to Sister" celebrating LGBTQ artists at NYU's Institute of African American Affairs with Seyi Adebanjo, James Earl Hardy, C. Riley Snorton, and Q-Roc Ragsdale. (It was a dynamic evening of exchange and intensely beautiful conversation about Black genders and sexualities. Thanks to Jaira Placide for organizing and inviting us!) I started writing a piece about all these adventures... but alas never finished... I plan to get back to it... at some point and will post reflections and such. 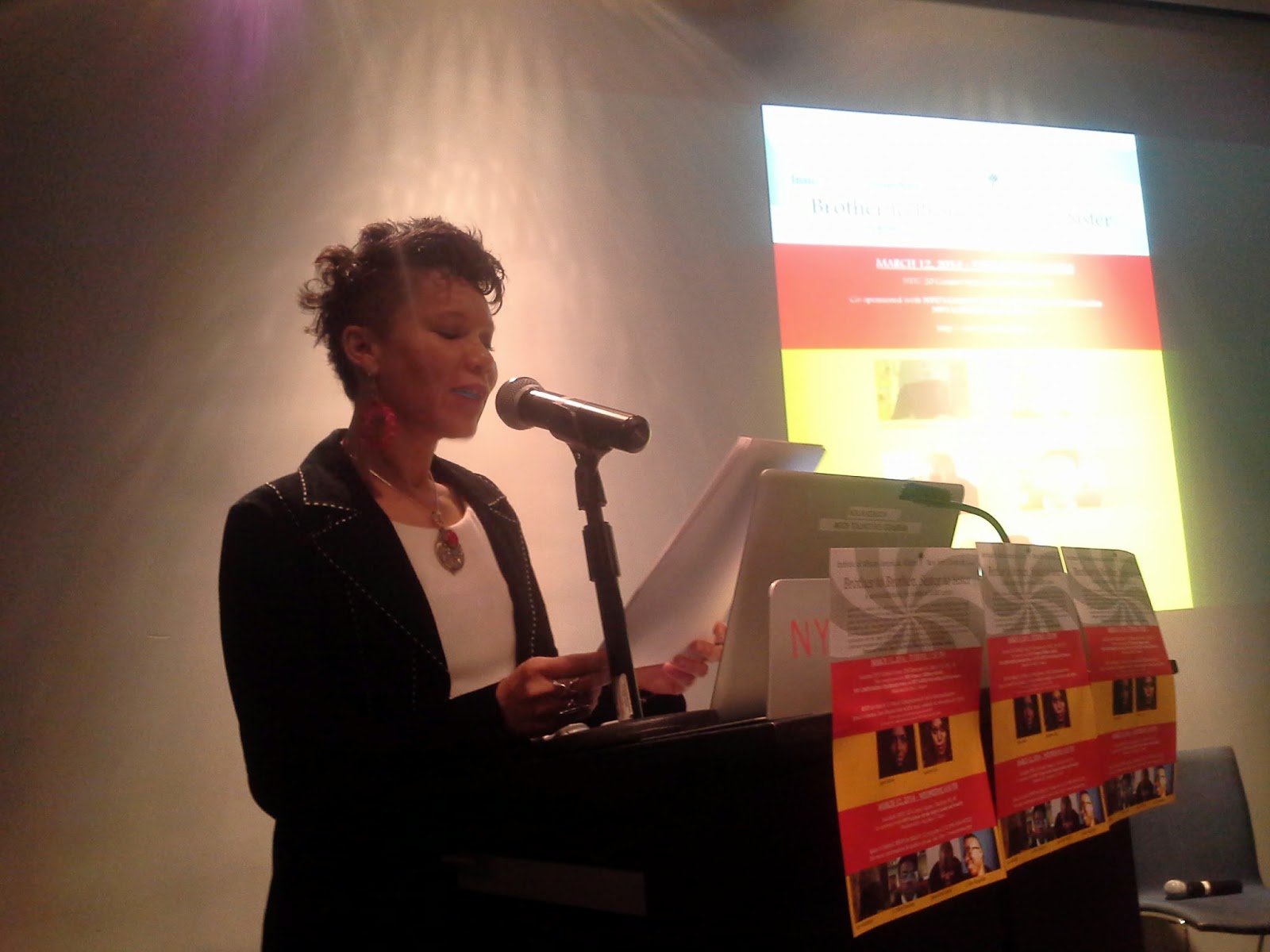 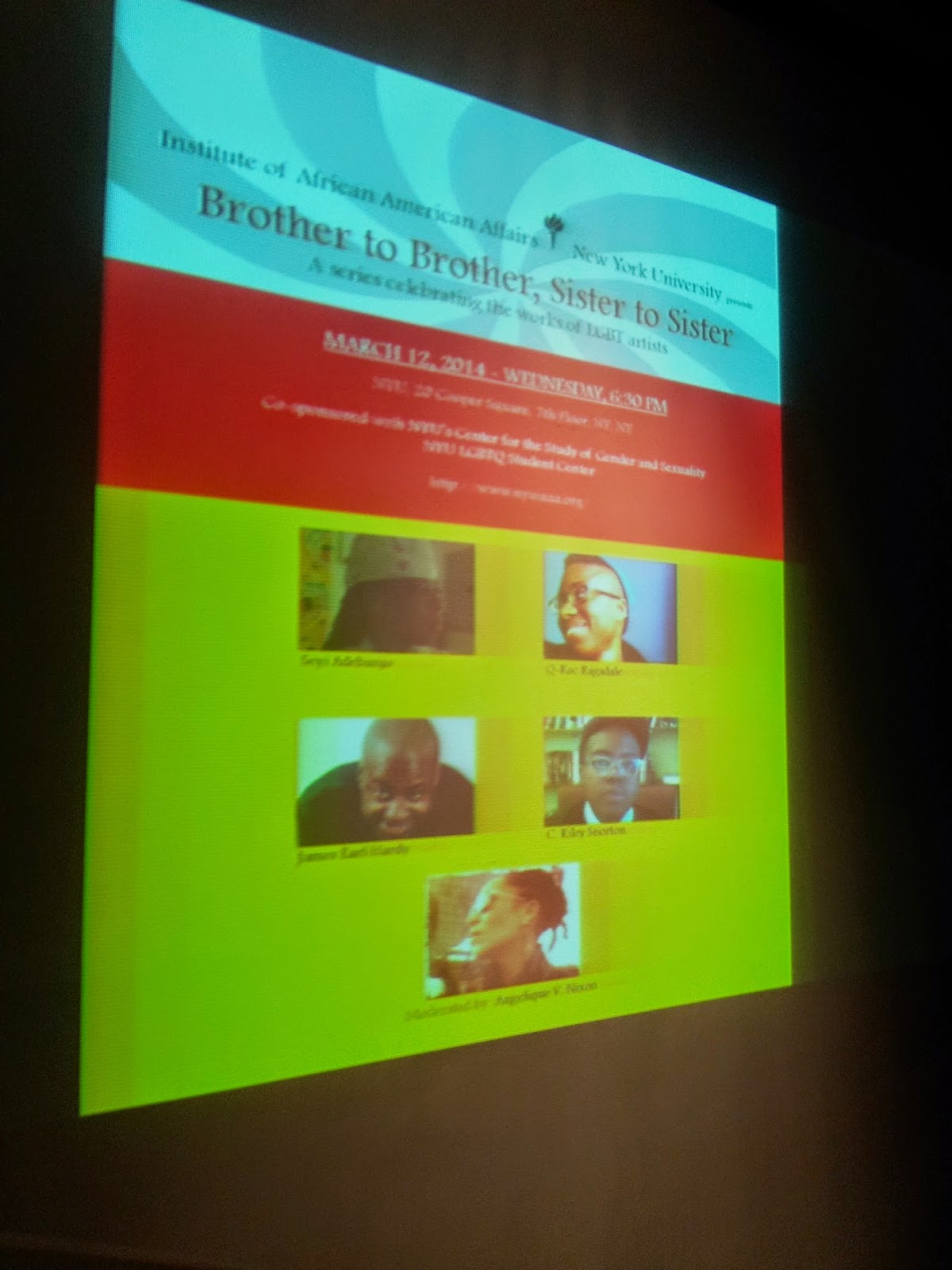 3) Getting published! -- a) I shared this here already but wanted to have it on this roll call of sorts / archive -- my essay "Magic and Fury of Audre Lorde" in The Feminist Wire. b) An article that I co-wrote with Rosamond S. King titled "Embodied Theories" in the Caribbean Review of Gender Studies launched early in Jan. c) I co-wrote an essay with Tonya Haynes published by Groundation Grenada titled "No Science is Neutral" -- (responding to the affidavit by a UWI Professor Bain on HIV/AIDS and buggery laws in Jamaica, his subsequent termination from working at CHART, and the aftermath of protests and the new slogan "speaking truth is not homophobia") -- Tonya and I offer a counter narrative and critical perspective. d) Most recently -- I was thrilled to be invited to contribute to a special Summer issue with Zora Magazine on Black Women and Anger. My piece is called "States of Anger: Black Women and Furious Survival" -- it is part creative non-fiction/essay and part memoir and poetry. 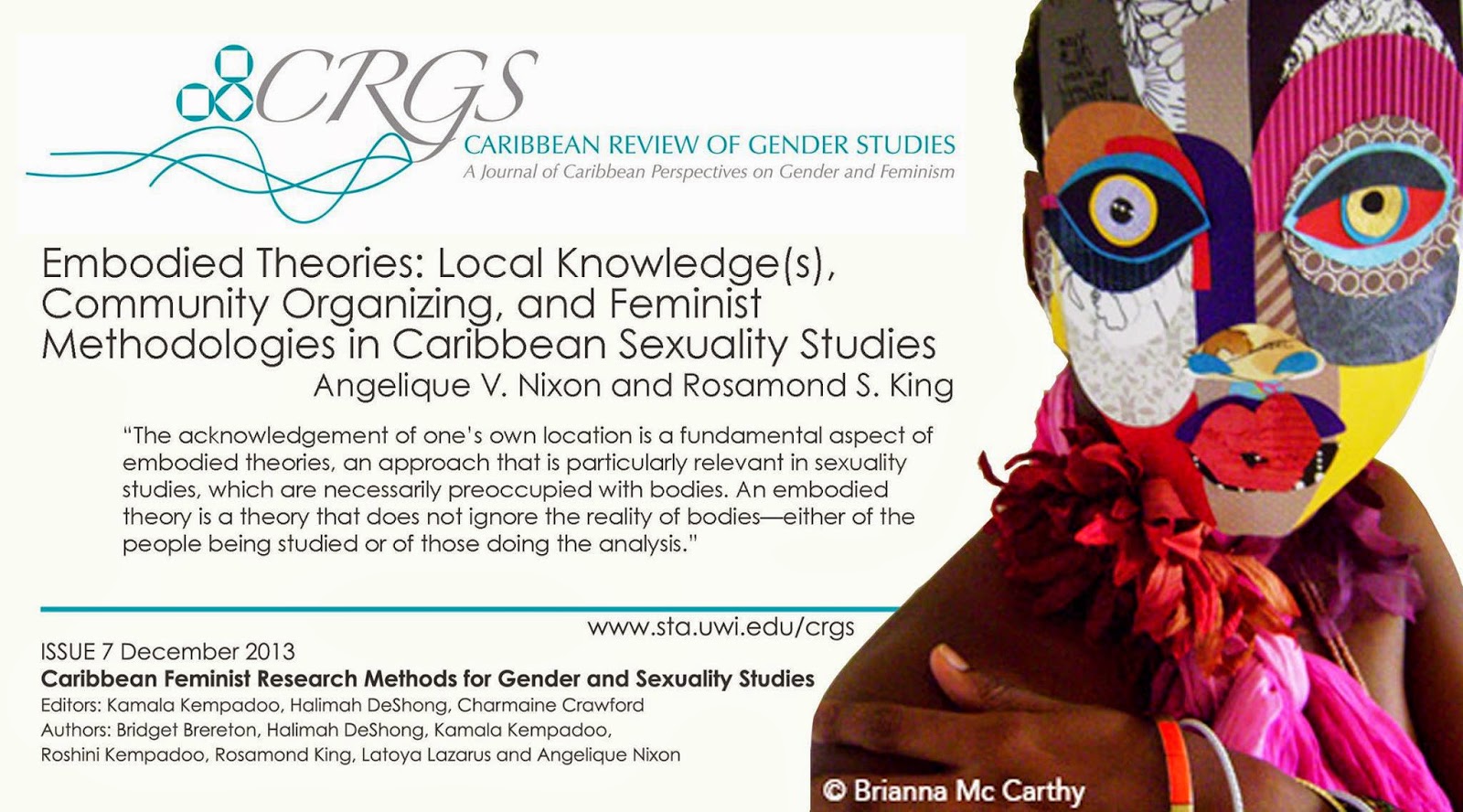 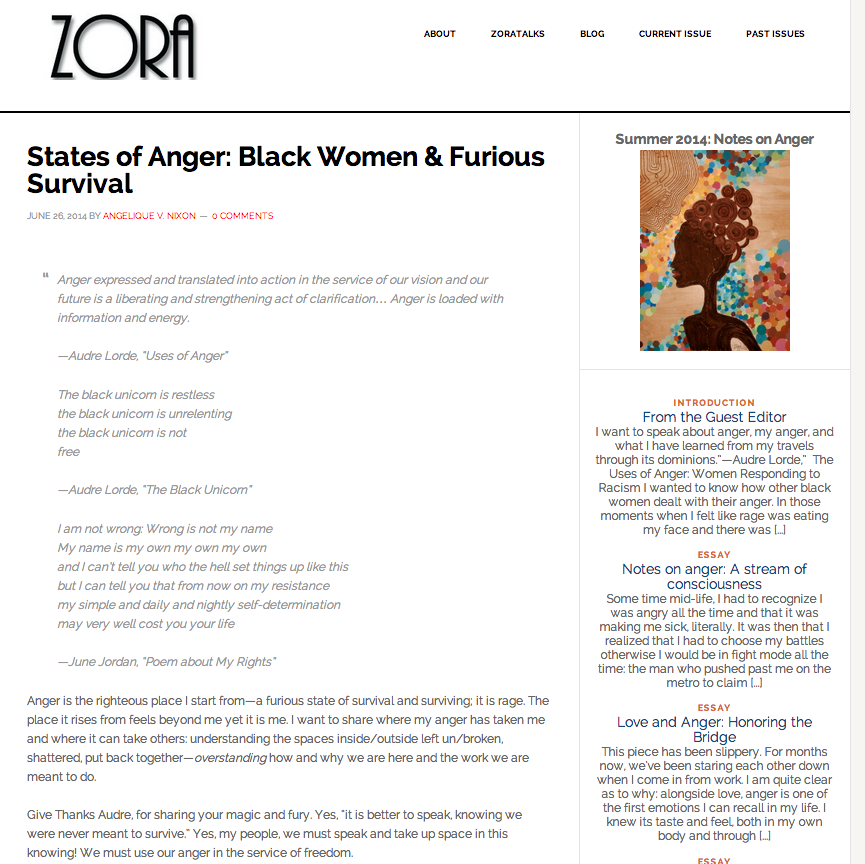 4) Epic Summer Journeys -- a beautiful mixture of work, writing retreats, and spending time with my chosen family and beautiful peeps -- started in May with the Caribbean Studies Association conference in Merida, Mexico and continued in Fort Lauderdale for my bday/month celebrations and Miami for the S.P.A.C.E. annual writing retreat, and then early July with the Essence Music Fest in New Orleans! Prince!!! 30th anniversary of Purple Rain - Epic! Jill Scott and Mary J. Blige were fantastic! And as if the weekend couldn't get any better -- met Erykah Badu and got into special VIP after-party with Erykah spinning! We spent a magical evening in her freak-quency. The summer is still going and there are more journeys to write/reflect on soon soon...

5) In April, I had the great opportunity to exhibit my new artwork "moon rituals in times of crisis" at Transforming Spaces in The Bahamas! It was an honor to be included and get to work with brilliant artists from across the region. See pics from the installation and more info below -- and also check out the audio file I created for the installation (my poem, "moon bathing"). Since my work was up at Popop only for a short time, I wanted to share it on this space. I also have a Tumblr page that will eventually have each piece uploaded so people can see each one in more detail. I planned for this project to exist digitally and so still working on how that will be and if I want to show this in the future... But for now, here is a taste!

Spirit revolution of 12 full moons during the Year of the Water Snake (Feb 2013 to Jan 2014 - following Chinese astrology). We are living during times of crisis — environmental, social, economic, and spiritual. The water snake year’s focus on rebirth and transformation has led us more fully into the consciousness shift we need to create and sustain real change. This installation honors the moon’s power over the earth and water, as well as our bodies and spirits. As the moon controls the ocean’s tides, she also affects our emotions.

This project explores these relationships and offers visual, spiritual, and ritual engagement with the moon. The rituals involve a process of spiritual practice and creation — taking photographs, writing reflections, and full moon meditation (based on various astrological readings). Photographs and short reflections are shared over social media — engaging in public honoring of the moon and the process of art making. During this time of planetary shifts, the return of the divine feminine, and the intense trouble we’re all in, this artist/poet/activist turns to the moon for self healing, intention setting, and ritual in order to participate spiritually and psychically in movements for radical social change.

*~*~*
"My obsession with the moon started early — as a girl child growing up in Nassau — I remember vividly feeling the power of the moon. Always looking for her light. Believing in her magic. Once I found out that the moon controls the tides, I was fascinated and wanted to know everything about these connections — from the sea to the sky. And so my love affair with nature started long ago, worshipping the moon, calling on stars, talking to trees, and praying to the ocean."
*~*~* My full moon rituals involve a process of spiritual practice and creation — as I take the photographs of each full moon, write in my journal, and then engage my full moon meditation. During this time of planetary shifts, the return of the divine feminine, and the intense trouble we are all in, I turn to the moon for self healing and ritual in order to participate spiritually and psychically in movements for radical social change. I document one year of my moon rituals through photographs, literary art, and pastels on paper — with 12 individual pieces displayed together as one large installation, along with an audio recording of my voice performing my poem “moon bathing” which I wrote during the August 2013 Blue Moon.


I'm still glowing in the light of all this -- feeling incredibly blessed!!! And celebrating myself in this start of my 38th solar return! I'm in the midst of packing up my life, putting most of my stuff in storage, planning for early August travels and then my big move to Trinidad at the end of August :) until then... I have way too much to do... so I'm bending time and working under the cosmic spells of moon magic.

Posted by Angelique at 3:01 AM