It's been too many days and relief efforts in Haiti seem beyond slow and not enough. The global community has responded, people have donated / are still donating money, organizations are rallying for more and more support, aid is pouring into the airport, yet the people of Haiti are still suffering and dying... A number of journalists have written about the slow movement of relief aid, the frustration of Haitian people on the ground, and the militarization of aid. Friday's Democracy Now revealed some of the reasons for the slow distribution and how days after the quake, so many Haitians are still waiting for food and water and still waiting for medical treatment.

U.S. media has created frenzy over fears of violence, and the United Nations and U.S. Military keep blaming "violence" and "looting" for the slow distribution of aid. But as a number of journalists keep reporting, the "violence" has been minimal and most of it understandable given that people are hungry and desperate. Furthermore, reports about the prisoners escaping have also fueled concerns about violence, but Democracy Now did an excellent report about this very issue - speaking with a local Human Rights Lawyer who explained that about 60-80% of the people locked up were never charged with anything. It is alarming to consider the similarities between the slow response and frantic media coverage of New Orleans post-Hurricane Katrina and what is now happening in Haiti post-earthquake. A great op-ed piece highlights this very issue - "More than Aid, Haiti needs Allies" - pointing out these similarities and arguing why Haiti needs allies in this struggle for immediate relief but also in the long term re-building efforts.

Relief Efforts - How to Help!
Donate if you can, and/or spread the word about these organizations:
Partners in Health - they have worked for over 20 year in Haiti with Haitian doctors and health care workers.
International Action Center - they have a campaign against the militarization of aid in Haiti: "Food not Troops" - sign the petition! - and read their statement of solidarity with Haiti calling for debt cancellation, and self determination for Haiti, not military occupation.
Yele Haiti - they have an up-to-date news blog with what Yele is doing in Haiti day by day to help people and get relief aid into communities. They are also discussing some of the towns and cities near Port-Au- Prince that haven't gotten as much attention - like Jacmel.
Lambi Fund of Haiti - "recovery extends beyond relief" - they are focusing on the long term and focusing on how to help re-build Haiti from within - helping people who need it the most.
Haitian Women for Haitian Refugees (HWHR) was founded by Haitian women in 1992 to respond to the refugee crisis faced by Haitian immigrants in the U.S. and Guantanamo Bay. HWHR has worked to provide solidarity and relief to past humanitaritan crisis in Haiti, including past flood disaster relief for Haiti and the Dominican Republic, and provides cultural programs that include popular education and community organizing. HWHR, Lakou New York, and MUDHA Movement of Dominican Haitian Women are organizing an immediate delivery of first aid relief to the Dominican/Haitian border, to quickly reach affected areas. Donations are being accepted through Pastors for Peace at -http://www.ifconews.org/node/723.
Dwa Fanm (meaning "Women's Rights" in Creole) is a human rights organization started in 1999 by Haitian and American women who share a commitment to women's rights as well as to social and legal equality, justice, peace and democracy. Dwa Fanm has activated an emergency response in collaboration with the Brooklyn Tabernacle to send doctors, nurses and community health workers to bring medical assistance and supplies to areas in Haiti that have been hardest hit.


Migration Rights
A year ago, I wrote a piece titled "Migrations Rights as Human Rights" here on conscious vibration responding to ongoing debates at home in the Bahamas about Haitian immigration. These debates have certainly continued over the past year, but since the earthquake, they have taken on a greater sense of urgency. There is now worldwide attention on Haiti and on the immediate needs of Haitian people. Given the devastation, it makes sense that a number of countries are granting status to Haitian migrants and promising not to deport Haitians back to a country in unimaginable crisis (particularly at the moment when people and countries around the world are helping Haiti through relief efforts). And while the United States has granted "Temporary Protected Status" to all Haitians migrants living in the U.S. for 18 months, they have indicated that new migrants post-earthquake will not be given this same status. This is unacceptable, yet falls in line with the deplorable U.S. policy towards Haitian migration - their refuge is not considered "political" - even during moments of intense political crisis.


In the Caribbean, there have been various responses to the issue of migration: Jamaica has offered help and status to Haitian migrants leaving Haiti after the earthquake. In the Bahamas, our Prime Minister has said that no deportations will happen right now and detainees were released and given temporary status. I applaud the decision to release detainees and give them status, but what about other "undocumented" Haitian migrants? And what about those who may be seeking asylum/refuge from the devastation after the earthquake? Prime Minister Ingraham has indicated that they will be detained and perhaps locked up until they can be deported. This is unacceptable. Our Haitian brothers and sisters need our help, they need our compassion, and they need our support.


I'm re-posting / re-framing parts of my letter here to highlight (and remember) some of our common histories and regional connections - and why we should all care about Haiti. While the focus of this letter is on the Bahamas, I think it resonates with the inhumane migration policies of the United States towards Haitians, as well as other countries who treat/frame any group of people who seek refuge / political asylum as "illegal" and then detain them with the threat of deportation / repatriation. We must rally for social justice and migration rights particularly at this time, in this moment, wherever we live. We must support migration rights now and into the future.


In the Bahamas, our immigration policy towards Haitians has long been shameful and it's time for us to make serious change. It's time for us to create and implement a sensible immigration policy for Haitians and Haitian Bahamians. We need to remember that Haitians have long migrated into the Bahamas and have LONG time been a part of the Bahamas and Bahamian culture. If one supports migration rights and human rights, then we cannot support our government's policy towards Haitians, and we cannot support the statelessness of Haitian Bahamians. During this time of crisis and into the future, we must continue to call on our government to offer more assistance to Haiti and Haitian people. We need to recognize the problems in Haiti are our problems too – people are suffering and dying. We should not discuss the “return” of Haitian migrants until Port-Au-Prince is re-built AND serious efforts are made to truly support and help free Haiti from the chains of debt and poverty (these efforts should be led by the Bahamas along with other countries in the region). This should not be seen as a handout, but as genuine regional solidarity and public acknowledgment of our commonalities and complicated histories.

Haiti does not exist in a vacuum. It did not suddenly become destitute or mismanage resources on its own. There are many reasons: tied to all the ways in which global capitalism works and how the Global South feeds/sustains and keeps wealthy the Global North. There are many reasons why Haiti is in political and economic crisis, why it remains the poorest country in the Western Hemisphere. Some of these reasons have to do with the violent dictatorships and corrupt governments since the 1960s, BUT many have to do with regimes of power (like IMF & World Bank), United States imperialism and their support of dictatorships, and a long history of interference. A history and silenced past much too long and complicated to recount here, but some important moments that many of us who study Caribbean history and culture know. Some of these historical silences are being discussed in progressive news reports and even in some mainstream news: particularly a discussion of the Haitian Revolution in 1804, which sparked intense fear across the Caribbean, in the United States, Latin America, and Europe. As a result, Europe and the United States worked to destabilize Haiti; to name a few examples: France demanded 150 million in gold to recognize Haiti as a nation; the U.S. Occupation of Haiti from 1915-1934; Haiti not fully recognized as a republic until well into the 1900s; United States through their Munroe Doctrine continuously interfering in Haiti’s economic and political landscape for their own military and resource interests for over one hundred years.


Haiti like the rest of the (post)colonial world has a context – slavery, colonialism, and new forms of colonialism. This historical/political/social context must be taken into account as we try to understand the present, and as we work towards a better future. A future where we embrace each other regardless of our differences, a future where we love and support each other, a future where we can all be human and free.

To push this conversation forward and to initiate a call to action, I created a Facebook group "Haitian-Bahamian Solidarity" with fellow Bahamians who are deeply concerned with how Haitians are being and will be treated in the Bahamas. We started a letter writing campaign - (for more info, check out the Facebook Group and website). The aim is to create space for Bahamians to discuss the important issue of migration and create a long term vision of exchange and solidarity among Haitians and Bahamians. The first goal / call to action is our letter writing campaign to the government of the Bahamas (see the website - bahatiansolidarity.wordpress.com - for all the details and how you can participate). Fellow Caribbeans and the larger global community are invited to participate in our letter writing campaign. But we also ask that you also write your own letters to your government/leaders calling for similar support.


Supporting Haiti and the people of Haiti means not only responding right now, but also thinking of the future, sustainable and locally-led development in Haiti, and progressive migration rights. 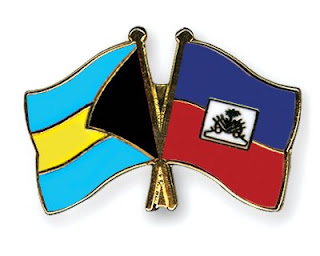 Posted by Angelique at 3:02 PM

Email ThisBlogThis!Share to TwitterShare to FacebookShare to Pinterest
Labels: Haiti