“Missing, Deported or Uncounted – Who Matters After Dorian?” 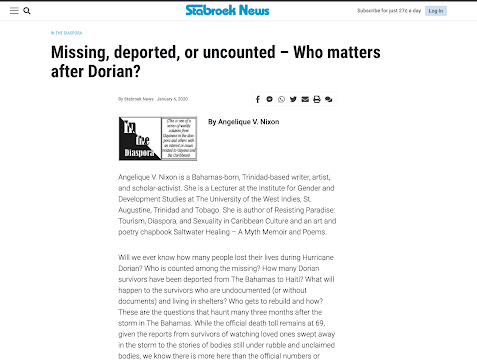 Missing, Deported, or Uncounted – Who Matters After Dorian?

Will we ever know how many people lost their lives during Hurricane Dorian? Who is counted among the missing? How many Dorian survivors have been deported from The Bahamas to Haiti? What will happen to the survivors who are undocumented (or without documents) and living in shelters? Who gets to rebuild and how? These are the questions that haunt many three months after the storm in The Bahamas. While the official death toll remains at 69, given the reports from survivors of watching loved ones swept away in the storm to the stories of bodies still under rubble and unclaimed bodies, we know there is more here than the official numbers or reports can tell us.

In the past months since the devastating hurricane, the numbers of missing persons and confirmed deaths have remained woefully confusing, with officials reporting the difficulty of being able to give an accurate count. While the numbers went down after the first few weeks with rescue and evacuation efforts, officials suggested that many people were found with varying estimates of numbers still missing from week to week. After the storm, officials reported 2,500 missing persons but this dropped to 1,300 then to 600. On October 1, the National Emergency Management Agency (NEMA0 reported 424, then 346 two weeks later, even as The Tribune was reporting that  the Minister of National Security confirmed  282 persons missing. Through November and December, the numbers remained around 300 with questions lingering still of who is counted among the missing.

President Stephanie St. Fleur of the Human Rights Organisation, Rights Bahamas,has raised this grave concern a number of times. In October, she called out the government and NEMA for not including the reports of missing persons from the Haitian migrant community that Rights Bahamas had collected and submitted. In November, St. Fleur asked where was the accountability on the missing persons list, especially for those families who were evacuated to shelters (from Abaco to Nassau).

Bahamian Prime Minister Minnis said in early November that “It’s very difficult for us to have an exact count on the numbers of missing individuals, because you would recall that there are a lot of undocumented individuals. If they are undocumented, we won’t have records of them and therefore you may find that that number may fluctuate. But we are doing our best to keep count of and reporting to the nation at large as to the count, number of dead as well as number of missing” (qtd in “Lack of Accountability on Dorian Missing Persons List” Eyewitness News Bahamas, 26 November 2019). But as Rights Bahamas has asked, who is included in the numbers and have survivors of Haitian descent been asked by officials about their missing relatives or loved ones? While the Attorney General issued a statement in early December encouraging undocumented migrants to report missing persons (Jasper Ward, Nassau Guardian, 3 December 2019), there were no assurances that this reporting would not lead to deportation.

The Government of The Bahamas’ moratorium on deportations of those who survived Hurricane Dorian lasted only a few weeks. By early October, just one month after the most devastating hurricane ever to hit The Bahamas, several reports emerged of the government deporting Haitian migrant survivors to Haiti – who were deemed to be undocumented. The news reports of these deportations were seen in local Bahamian news media, regional news media, and international news media such as the Miami Herald 3 October 2019, NPR 5 October 2019, New York Times 10 October 2019 and other news sites such as Buzz Feed News (October 3 and November 9). Based on the news coverage and reports from the International Organisation of Migration 15 November 2019, 340 persons were repatriated to Haiti – most of them being survivors of Dorian who had lost everything. Those persons deported have been described by the International Organisation for Migration as “traumatized” and unable to make a living in Haiti.

This is all happening during a political and economic crisis that’s been going on in Haiti since September. Haiti is no stranger to political upheavals for decades and certainly since the earthquake, there has been an enduring crisis of slow and painful recovery. But the past few months of uprisings against the high cost of living, increased energy costs, corruption, and neoliberal policies have put the country in a near political and economic standstill. People have taken over the streets with daily protests that have shut down businesses and movements in Port Au Prince as well as other cities across Haiti. This is no time to deport people to Haiti. This is no time to send people who have been living in a place for years and decades to somewhere they don’t know, to somewhere they won’t be able to make a living. Where is our sense of solidarity, of empathy, of regional understanding or support? How do we make sense of our regional relationships, migration needs, post-disaster support in the wake of climate and migration crisis? How do we make sense of these deportations?

Some of these people have been sent to a country they don’t know very well or at all. Some were born in The Bahamas and therefore have a right to access or apply for citizenship at 18. Some are children and therefore have a right to an education under Bahamian law. Some had Bahamian documents but lost everything in the storm. Some are likely traumatised after their experiences of horrendous and unspeakable loss. Some spent weeks in shelters. Some are sole survivors and have not been able to grieve for their loved ones. Many of these persons deported lived in Abaco and contributed directly to the Bahamian economy through their labour and skills (working at resorts, wealthy homes, and in agriculture and construction). Some have been separated from families. And those left in the Bahamas (in shelters and elsewhere) continue to be the most vulnerable and subject to deportation and xenophobia.

In December, a Bahamian nationalist group (Operation Sovereign Bahamas) emerged in the front of one of the main shelters in Nassau at the Kendal Issacs Gym to protest the Haitian migrants still there and to call on the government to deport all of them. The irony that of all the problems going on in the Bahamas post-Dorian - from the slow process of recovery, the severe water problems in Grand Bahama to the land grabs and neoliberal development plans in Abaco that will likely not benefit the majority of Bahamians - this is what they choose to protest - a small group of survivors of the most devastating hurricane ever to hit the Bahamas. The stigma and discrimination against Haitians and persons of Haitian descent in the Bahamas has long been an issue but has been fueled post-Dorian. What is most disturbing here is the lack of empathy in the Bahamas towards Haitians who experienced the same horrendous loss and trauma of Hurricane Dorian and climate crisis, people who have had unspeakable loss and who have lost almost everything. How does this not bring us together but instead create even more divisions and fear?

Local news coverage has dwindled on the issue of deportations and missing persons. And it is even more difficult to find any reports or updates in this first week of the new year. As we usher in a new decade with more and more horrifying news about the climate crisis (from Australia to Indonesia), I ask us all in the Caribbean region to think seriously about our climate action, how we are moving into this new decade, and how we will demand justice for all.