“What Does It Mean to Survive After Dorian? On Caribbean Disasters, Development and Climate Crisis.” 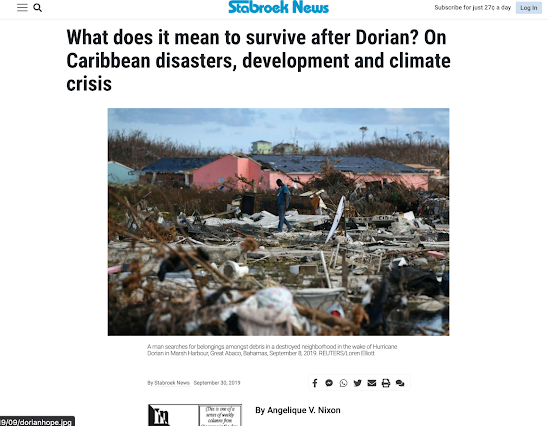 What Does It Mean To Survive After Dorian?

Angelique V. Nixon is a Bahamas-born, Trinidad-based writer, artist, and scholar-activist.
She is a Lecturer at the Institute for Gender and Development Studies at The University of the West Indies, St. Augustine, Trinidad and Tobago.

The stories of rescue and relief in The Bahamas since Hurricane Dorian have left me and so many in heartbreak and reflecting on what it means to survive – from the man who rode out the entire storm hunkered in the mangroves of Abaco, to the people who held onto trees during the storm surge, to the sick baby found in The Mudd with a father who didn’t leave for fear of being deported. The injured survivors (Bahamians and Haitians) at the Princess Margaret Hospital in New Providence telling doctors that they don’t want treatment, they don’t want to live, because they have lost everyone – sole survivors of families drowned or swept away in the storm. The Haitian migrants (now twice displaced) calling for the bodies of their loved ones to be found and buried with respect and dignity. Haitian migrants living in fear of deportation and hiding even with the promise of the Bahamian government that deportations are supposedly on pause. Bahamians trying to enter the United States to visit family and get away in the aftermath of Hurricane Dorian and being denied entry. The explicit xenophobia and framing of our people as ‘very very bad’, ‘drug dealers’ and ‘gang members’. Haitian children being deported by the Bahamian government. These stories are hard to hold or imagine, yet we must.

Entire lives are on hold across The Bahamas – from those evacuated and displaced at shelters across New Providence to those in Grand Bahama cleaning up and clearing out what is left of their homes. Imagine being a poor or working class Bahamian family. Imagine being a family or sole survivor, having lost everything or almost everything, and trying to pick up the pieces. Imagine the grief and suffering, the psychological trauma, of survivors. Imagine being the most scorned in this country, the ones blamed and scapegoated for almost every social problem. Imagine being a Haitian migrant right now living in The Bahamas, or living elsewhere across the region. Some of us don’t have to imagine any of these – either we know people experiencing this or we are experiencing it – the proximity to disasters, the trauma, of being treated as other, less than, not equal to, expendable or deportable.

And so I ask all of us in the Caribbean – where is our collective outrage, our climate action movement, our migrant rights movement, where is our action against unsustainable development and neoliberal agendas, where is our intersectional politics and action?

As the Global Climate Strike erupted around the world on 20th September, I couldn’t help but feel a sense of hopelessness across our region. To be sure, there were a few important actions, most notably the successful protest against mining in rural Jamaica to save Cockpit Country. In Trinidad, young people planned and led a march with 150 people around the Queen’s Park Savannah. Representing the region at the UN Climate Summit, we had 11 Caribbean youth attending the first ever Youth Climate Summit; and Barbados Prime Minister Mia Mottley demanding climate action and justice for all small island nations, warning that there will be mass migration if climate crisis continues. Compared to thousands who marched in strike events and actions across the globe, there was mostly silence in our region, especially from leaders. Where was our regional climate action, our regional uprising?

Perhaps it is being in the midst of relief and recovery from Hurricane Dorian just a few weeks ago, still in recovery from Hurricane Maria just two years ago, from Hurricane Matthew three years ago, from the earthquake in Haiti a decade ago, and on and on. But perhaps the disasters we don’t talk about enough or even at all are the most dangerous – the disaster of tourism development, over reliance and dependence on foreign investment, continued exploitation of migrant labour, and the failures of our post-neo-colonial states. Maybe we are too afraid to speak or act. Maybe we haven’t done enough to educate the public about climate change or social and environmental justice as one connected struggle. Maybe we spend too much time blaming individual consumers instead of placing more blame and accountability on private sector, industries, and governments. Maybe the environmental movement in the Caribbean has failed with its middle and upper class politics. Maybe other movements have failed to show the connections between social inequalities and climate change. Maybe it’s easier to blame ‘immigrants’, ‘gays’, and all those scary ‘others’ for our social problems.

Maybe we have no plan B for economic development, and so we continue to build a tourism industry that does not care about our sustainability or future outside the usual recipe of sun, sand, sea and festivals. Maybe we fear calling out the ways tourism dependent small islands rely on the bits of income from cruise ships which pollute our waters and leave their garbage. Maybe we have not learned lessons from the disasters of structural adjustment policies that leave our countries in debt and too many of our people in poverty and despair. Maybe those of us with oil and other natural resources still believe that will save us. Maybe we still believe the lies of globalization, development and progress in the pursuit of a place in the global capitalist market. Maybe we believe that our (post-neo)colonial masters will save us. Maybe it’s all too overwhelming and unimaginable as we live in the apocalypse of climate crisis now.

After Tropical Storm Karen, which affected us in Trinidad and Tobago just a week ago with mass flooding across both islands, I write this in fear and panic about our future, in deep anxiety about our silence and complacency, in solidarity across our precarious Caribbean region, especially with the most vulnerable of our people. We know we are in crisis. We feel it with each hurricane and rainy season and rising temperatures and seas. We see it as we drive along our coastlines with erosion and destruction of our mangroves; we experience it with dry season and forest fires, with clearcutting for tourism and other development projects. We hear it with each report of coral reefs bleaching, fish disappearing, record-setting heat waves and storms, mass extinctions, and rain forests on fire across the Amazon and Sub-Saharan Africa. We smell it with the pollution and garbage burning in our landfills, across our small islands – where we produce less than we import, where on the smallest islands we import way more than we need for tourists and migrants with status and money, who consume more than we do. We touch it in one way or another through the reliance on migrant labour needed to fuel our externally dependent economies, to do work that nationals don’t want to do, and to rebuild in the aftermath of disasters. We know it when we hear of yet another deal on a development project, a new cruise ship port, a set of condos, a new hotel, or more exploration for oil and gas. We understand it in the aftermath of hurricanes when new development deals are signed before recovery has even started for locals who have lost their homes. This is happening now in Abaco and Grand Bahama just four weeks after Hurricane Dorian. Bodies are still buried under rubble, islands completely devastated and there are already plans to sell land to the highest bidders.

We are complicit when we don’t call out all the ways our small islands are made more vulnerable and marginalized in these unnatural disasters, the ways we are exploited and then exploit others.

Our Caribbean region is one of the most tourism dependent regions in the world. And so when I read the Forbes article by Daphne Ewing-Chow on 20th September 2019, titled “Caribbean Islands Are The Biggest Plastic Polluters Per Capita In The World,” with no mention of the almost 40 million tourists per year who visit (mostly on cruise ships), I was furious. It’s not that the article is completely wrong – indeed we do have a serious problem with plastic consumption and waste per capita that is outrageous – but rather it’s that the author fails to include a huge part of the problem, which is tourism and neo-liberal development. It’s no coincidence that most of the top ten Caribbean polluters are also the most dependent on tourism --Antigua & Barbuda, St. Kitts & Nevis, Barbados, St. Lucia, The Bahamas, Grenada, Anguilla and Aruba.

This article was circulated on Global Climate Strike day. Perhaps the goal of the author was to name our small island nations as also being major contributors to marine waste. While the author does identify “inadequate waste management” as a root cause of the problem, the landscape is complex and wrapped up in quite literally not having enough space or resources to manage the waste of our own residents, much less millions of tourists. Recent climate change research has identified serious concerns about the “carbon footprint of global tourism,” especially for the Caribbean. The true cost of tourism is one not usually included in popular media conversations about climate change and pollution – with few exceptions such as the 2018 article in Grist by Justine Calma, “The Caribbean on your vacation but suffers from its carbon footprint”. These are the global relations of power, pollution and unsustainable development not many are willing to face – because we are overly reliant and dependent with no plan B. Meanwhile, visitors from the Global North flock to our shores, consume and exploit because that is the promise of paradise.

But no one in paradise is supposed to talk about the ugly truths of exploitation, environmental destruction for development, competition over scarce resources, the limited supply of fresh water, or the diversion of resources (water and electricity) to hotels and foreign-owned wealthy homes. Nor are we supposed to talk about the ways limited jobs in “development projects” turn us against each other, or the horrifying untold stories of migrants fleeing one set of unlivable conditions only to find themselves abused and exploited. We see this with many Haitian migrants living in The Bahamas and Dominican Republic, as many Venezuelan migrants seeking asylum right now in Trinidad and Tobago, as many Guyanese migrants experience hardships in Barbados, as too many. We can keep this going all the way back to all the ways our Caribbean people have had to move and relocate in search of something better. Isn’t that what we all want? Something better?

We need these harsh truths and untold stories to be spoken, analysed, and understood, in the face of the many unnatural disasters we are living. We are in this together, our survival depends on it – our region, our people, our vulnerable islands of complex, unique and shared histories. We need honest reflections, sustainable solutions, tangible empathy and reasonings, regional actions and uprisings and revolutionary decolonial justice-visioning in our Caribbean to survive.