The months are flying by... summer is here :)  May brought me many blessings and travels - which is why I haven't written on my blog... sadly... BUT I'm working this month on getting it together... and so I now report on my goings on - May was hectic with preparing for the Caribbean Studies Association conference - held last week of May in Barbados. The conference was intense, productive, and at times really hard. The theme was on the everyday occurrence of violence in the Caribbean - and given the violence in Jamaica that began at the same time - the panels and discussions had an even more urgent tone. The conversations were heated and important... yet nothing could stop the pain so many of us felt - the helplessness...  all some could do was share news, dispel un-truths/mis-perceptions, and offer another perspective to what was/is happening in Tivoli Gardens.

I appreciated those who spoke up about dispossession and feelings of alienation that many in Tivoli feel - specifically the class dynamics that many want to ignore. This all made me think deeply about class violence and the violence of poverty - and how a community can be so easily excised from citizenship and political representation. And even within the conversations about the Tivoli community - what was/is left out - the silences about everyday class-based racial violence, the violence enacted through language and discourse, and issues of gender and sexuality that are silenced in the name of other fights and causes. I believe even more now in what Franz Fanon told us so many years ago - that the process of decolonization will necessarily be a violent one - because slavery and colonialism were so very violent. We are still in this struggle.

All these conversations about violence made me think about the space on which the conference was hosted - at an all inclusive resort - Almond Beach - which is on the site of a former sugar plantation. This fact is described in the hotel advertisements as something positive. And as we Caribbean academics, writers, scholars, teachers, artists, and activists all descended upon this site, I couldn't help but wonder over and over again throughout the week as the conference progressed - what did this "site" do to us spiritually...  My friend and colleague who I roomed with at the hotel expressed his discomfort and anxiety with the space repeatedly - especially as we walked by the old sugar mill - where (straight) people get married... it was disturbing and yet it was strangely familiar to me because so many hotels across the region are located on such sites or at the very least use colonial images and rhetoric. It was surreal though - the site, the "village" theme of the hotel, and the stoic looks of hotel workers. I am so familiar with such sites, themes, and looks - being from and raised in The Bahamas - and a former worker in the tourist industry - I know all these far too well. Therefore, it was both comfortable and disturbing for me even as I enjoyed my time, the work, and the beach. I was constantly reminded of the history, our history, the price we pay, and our lack of choices within the double bind of tourism. I've been doing scholarly research and writing on tourism for a while and even with all of my critiques and personal experience, it remains very difficult to challenge tourism - because tourism itself is a form of violence. We live, work, eat, smell, and breathe tourism, which is sustained through the violence of slavery and colonialism. And yet and still... it is our livelihood... It is our bread and butter... It is how we live and don't live. It is how we can move and not move... travel and not travel... 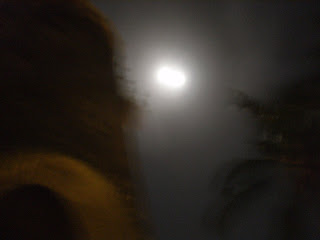 I took this picture of the eerie sugar mill - haunted still by the blood and sweat of our ancestors - to remind me of how I felt walking by this sugar mill every morning and evening on the Almond Beach / sugar plantation / hotel resort. Inside there is a wedding arch... the tragic irony of it all... This picture tells a different story though... The moon grew full while I was there - and a huge gray'ish purple circle around the moon emerged on the night of the full moon, a kind of halo... Perhaps the moon spoke through this circle... I was obsessed with the moon and took many pictures with my digital camera - trying to capture my melancholy about the space even as I took in the moon's magic and the ocean's energizing spirit. 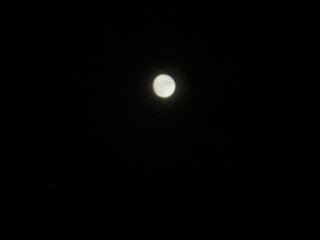 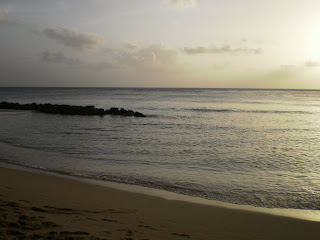 The conference was also challenging on another level - within the panels and discussions about sexuality - and the participation by openly LGBTQ / sexual minority Caribbeans. We represented in personal, political, and academic terms. We challenged the hetero-normative and hetero-sexist dynamics of the conference space... but of course there is more work to be done. I co-facilitated a Caribbean IRN workshop on Caribbean Sexualities and strategies to confront homophobia (& we continued our IRN work from the last CSA conference and the first Caribbean Sexualities Gathering in Kingston last June). This year, I presented on some ways to address and theorize about "homophobia(s)" in the region. I also talked about how we need to build coalitions and new languages and praxis. My co-facilitators presented on specific forms of activism and politics inside and outside the region, anti-violence work, current campaigns, and networking. We had excellent conversations and exchange about ideas and future work. We deliberated on the need for language that includes trans-phobia and addresses gender performance. We discussed the work of a Sexualities Working Group within CSA (which is now officially established)- and how to sustain Caribbean Sexuality Studies. We connected and networked about activism in the region. We forged new alliances and possibilities for collaborations. But we were too ambitious with the time we had... so we didn't get to everything... nevertheless it was a good workshop - productive and energetic. And I feel renewed to do the work and keep our projects going. But more on that later.

My meditations on tourism and violence during the conference have pushed me to make stronger and more explicit connections in my work about sexual and cultural identities. I am thinking more and more about my idea of "resisting paradise" and how this resonates deeply with anti-violence work broadly and within sexual minority activism inside & outside the region. I return to Audre Lorde over and over again - and her argument that we can not fight one form of violence without addressing all forms of violence. 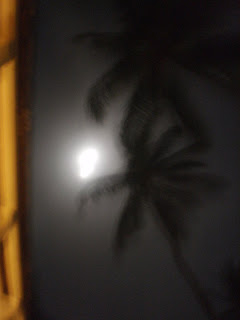 Posted by Angelique at 3:48 PM

This is a very apt description of what transpired and how some people were feeling. A testimony to the participants at CSA though is that people were able to talk and have conversations which could continue the work. I am personally disappointed that the issue of violence against children did not get the prominence it deserved, given that the Caribbean is a place where 'beating children is part of our culture' we are always told.