Being a Revolutionary Intellectual – In Radical Process

(or what the hell am I doing in the academy?) 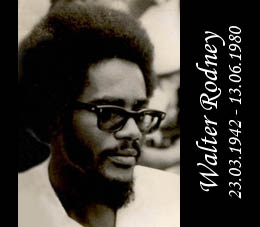 And I felt that somehow being a revolutionary intellectual might be a goal to which one might aspire, for surely there was no real reason why one should remain in the academic world – that is, remain an intellectual – and at the same time not be revolutionary.
- Walter Rodney

So what our consciousness has been battling against, the regime of "truth" which has structured our "consciousness," is functioning against our best interests. It is negating ourselves; and so there's this constant struggle. You see, it's not just an intellectual struggle. You could call it a psycho­intellectual struggle. Then you could understand why in the '60s it wasn't just a call for Black Studies; it was a call for Black Aesthetics, it was a call for Black Art(s), it was a call for Black Power. It was an understanding that, as Lewis Gordon has been the first to keep insisting, we live in an anti-Black world -- a systemically anti-Black world; and, therefore, whites are not [simply] "racists."  They too live in the same world in which we live. The truth that structures their minds, their  "consciousness," structures ours. So the great battle now is going to be against “the truth.”
- Sylvia Wynter

So I’m finally sitting down to share reflections on my blog consciousvibration of my epic journeys to Ghana in May and Grenada in June, and then I read a beautiful tribute and sad reminder of the anniversary of Walter Rodney’s assassination in my facebook newsfeed. I had just gotten back from Grenada a couple days before, and I was in recovery mode from intense conferencing and back to back (blessed) travels across continents and oceans. I was thinking about the whirlwind of movement, exchange, and beautiful experiences – and wanting to write down every important moment  But my body had other plans for me – a week of rest and healing. So I finally get to this piece of writing and the words of Walter Rodney stay with me until this piece of writing becomes me reflecting on the hows and whys of my travels.

Both of these trips were for conferences funded through my work in the academy yet fueled and reflective of my work outside of it (my creative and community work – my art/poetry/organizing). And so when I read this quote by Walter Rodney above  (on the anniversary of his death on 13 June), it resonated deeply with me as I continue to struggle with my vexing relationship to the academic world – never feeling like I really belong. It also reminded me that if I am to be in it, then I must stay true to who I am in the world: staying in the struggle for freedom and liberation, social and environmental justice, fighting for sexual, gender, class, and racial equality, creating space for resistance and desire, AND using my voice, my art, my teaching, my writing -- as feminist, womanist, anti-imperial, anti-racist, class conscious, queer affirming, loving Blackness, and radical transgressive movement. Being a revolutionary for me means all these things and more… being in the tradition of women of color writers and feminists and all of our ancestors who resisted before/when our revolutions were thought impossible/unthinkable. Revolution means struggle, but it also means healing and radical self-care and love. It also means taking incredible risks and being a warrior – at times alone and afraid but rooted and guided by spirit and the earth…

So I believe that I am (and I aspire to be) as Rodney suggests – a revolutionary intellectual – in radical process. I agree with him completely – it is the ONLY reason (for me) to remain in the academy. I have also reflected on Sylvia Wynter’s reasoning and critique about Western systems of knowledge and how we must constantly do battle with our own consciousness (as Black people particularly but also as people of color and marginalized peoples generally) because “academia is a process of socialization” – i.e. educational systems as they exist function to “reproduce the order of society” (see her brilliant interview in ProudFlesh, Issue 4 2006). Therefore, Wynter argues that we must do battle against “Truth” and engage in a psycho-intellectual struggle. So as we learn and teach in these institutions, we are implicated in an elitist and controlling, western dominated systems of knowledge. But teaching and learning in such institutions forged my intellectual growth and social mobility, even though I know these places were never meant for me/us and that they will never accept me/us fully – somehow I have had to be okay with that – and take what I need and continue to forge my path – and use its resources to further my community and creative work. And while I am in them – do battle with “the truth” – and turn it inside out and make my teaching and writing part of the necessary unsilencing and challenging of these very systems of knowledge. (Let me clear - I know this ain't easy work and I'm not entirely sure if I can make a difference but I push forward - aware of the hypocrisies, the contradictions, and the corporate takeover of universities.) I remain critically engaged (in battle perhaps) with these institutions and the academic world – existing both inside and outside.

But for today, I find much comfort in Rodney’s words – and hold them close as I make sense of my years and discomfort in the academy. I think about my travels since I started my career in academia. I think about the mobility and access to places and people I may never have had if I didn’t get my academic hustle on and funding to present at dozens of conferences around the world – from Brazil to France, all over the U.S., and across the Caribbean – my homespaces (places I have come to know and love because of opportunities afforded me through the academic world). And I remember me as a little girl who dared to dream that I could be something other than poor and troubled, and that maybe one day I would leave Nassau and travel. And I remember when I found out that there was a thing called University – and I wanted to go – even when I dropped out of high school. I dreamed, worked hard, and took advantage of opportunities as they came my way – knowing that they came with a price and that some of these had something to do with my light skin, mixed race’ness and silence about race and class, while others came when I stopped being silent. (The paradox of difference. The paradox of being both invisible and hypervisible. The dilemmas of so-called multiculturalism and post-racial colorblind belief systems / bullshit – even when evidence to the contrary proves otherwise.)  And so I live in this paradox and embrace all the in-betweens and contradictions – and do what I can to create the spaces inside and outside where we can be critically engaged in resistance/revolution and re-build our consciousness - as Wynter says we must.

And so I am grateful and blessed to have these experiences, as they have made me even more committed to community organizing, creativity, and praxis. Since the beginning of my journey in the academy, I have insisted on making my commitment to community work and my creative self a priority. It is fitting then that my most recent journeys reflect a combination of my/selves as writer/poet/artist/teacher/scholar/activist – and that my invitation to share at the Yari Yari Ntoaso conference in Accra, Ghana was rooted in my creative writing and my grassroots organizing work in Haiti. And my work with the Caribbean Studies Association (CSA) and its annual conference has been grounded in regional organizing and support of Caribbean sexual minority organizations, as well as creating space for Caribbean Sexuality Studies and LGBT-identified scholars, artist, activists and allies within CSA and across the region. (More reflections and photos of epic journeys soon come - in my next post.)

Sitting with the words and works of Walter Rodney and Sylvia Wynter over the past few days as I wrote this piece has given me a renewed sense of place and perspective on what I am doing in the academy and what I will continue to do in spite of and because of my discomfort and un-belonging. All I can do is hold onto the promise and work of Revolution and stay in the struggle. There is so much going on right now across the world, its hard to make sense of it all and figure out where to put one’s energy – in this time of planetary shifts, environmental and economic catastrophes with masses of people rising up against austerity measures and government/corporate control, continued wars and occupations and too much bloodshed and sexual assault in the face of U.S. imperialism, prisoners at Guantanamo on hunger strike, attacks on LGBTQ people and rights, the alarming numbers of sexual abuse and domestic violence, the new bounty on Assata… and too much more… my heart wants to break with all this sadness, pain, and destruction…  but instead I mend her up with these dreams and hopes of revolution… and keep working.

Thank you Sylvia Wynter for your insights, your brilliance, and the depth of your intellectual battles. Thank you for continuing to keep us on our intellectual rigor to overstand and embrace your mighty words and theories.

Rest strong in the struggle Walter Rodney. Thank you for your work, your wisdom, your insistence on revolution. Thank you for keeping us honest and critical.

Powerful thought-stuff! Glad I found the place your writing lives. :)